I've been trying to decide what the best way to make this post would be so it's not a mile long. I'll do what I can to not make it overwhelming! Don't feel obligated to read the whole thing, it's bound to be insanely long!! I used this as more of a travel log so I wouldn't forget what all we did. Sorry ahead of time. :)
My roommate, Jenny won some airline tickets from work so she was nice enough to share with me. I love to be the beneficiary!!! As soon as she mentioned it, I immediately said that I'd love to do an Alaskan Cruise. She quickly agreed that it's definately the way to go. We ended up saving about $1400 each since the airfare was covered! How awesome is that? Thanks again, Jenny!
Day One 7/26:
We left on Saturday, July 26 and flew to Anchorage, Alaska. We arrived and were connected with our shuttle from Princess Cruises quickly thereafter. The cruise leaves from Whittier, Alaska. Whittier is about an hour and a half from Anchorage. We found out on our drive that there is only one road in and out of Whittier, which consists of a two mile one-way tunnel that you can only enter from the side we were on every hour on the half hour. The window is only 15 minutes. We arrived and as we were about to go through the gate, it closed. This meant we got to sit on the bus and wait for 45 minutes until the next entry. LAME! Our bus driver took us over to look at a glacier in the mean time. So, let me tell you a little about this tunnel. Basically, it was blasted out as a train tunnel. It used to be that only trains could get in and out. These train tracks are much more narrow that regular tracks. The tunnel had to be adjusted when the cruise terminal moved to Whittier. We basically drove directly on the tracks to get through. By the way, the fee for a bus to enter? $125. Some fees were up to $300! That's CRAZY! Luckily our portion was included in our price for the shuttle. The tunnel was just wide enough to fit our bus with only about a foot on each side. Now, I'm not a fan of tunnels, so this was the first of many fears I faced this trip. We made it through without a hitch.
Now I'll say a little about Whittier. First of all, this town is kinda known as a crazy town. I think most if not all that live there are a little off their rocker. The town has about 250 people and get this: they ALL live in the same building! The building looked like some office building. It was only about 3 to 5 stories tall. Anyway, I think it's a crazy town.
We got on our boat, which was the Diamond Princess, at about 6:00 p.m. and disembarked at 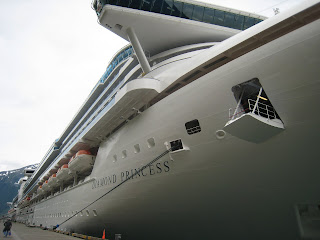 9:00 p.m. Our room was an ocean view, which was supposed to be a 'fully-obstructed view'. We were pleasantly surprised when we saw our actual view...not too shabby! 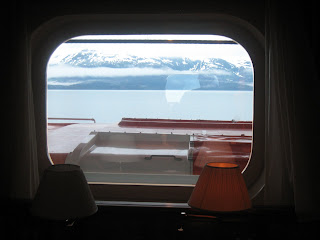 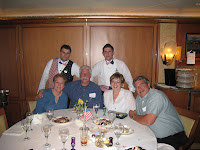 We were reserved for the late seating for dinner, which was at 8:00 p.m. We were at a table with eight people. There was a couple, Mike and Donna, from Virginia; a couple, Steve and Kathy, from Dallas; and a couple, Ron and Pat, (Steve's brother) from Kansas. We totally lucked out with our table! All of them were so cool. The brothers and their wives kind of adopted us as their daughters for the trip. They were really fun to get to know. We hope to go to their homes and visit them. The pic to the side is Kathy, Steve, Pat, Ron, Carlos (vest) our waiter, and Triche (sp?) the assistant waiter.

Sunday was a day at sea. We cruised Glacier Bay from 6:00 a.m. until about 9:00 a.m. This was beautiful. It was a little weird to see ice just floating in the water that we were in. The glacier was pretty cool. They were saying that some of these glaciers go back about 20 miles. It's kind of hard to imagine just how big they are...oh, and yes, all that stuff that you see floating in the water is ice... 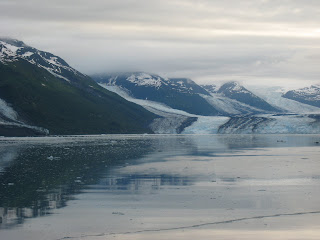 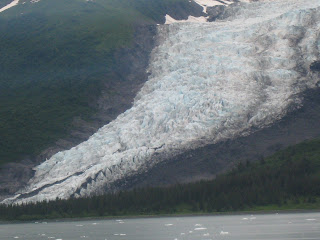 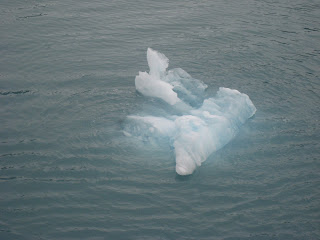 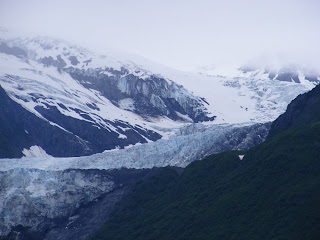 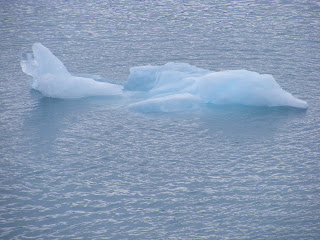 I don't remember specifically what all we did the rest of the day, but I think we took it pretty easy napping, reading, walking, and eating.

Monday was also a day at sea. We cruised College Fjord all day. It was beautiful! The fjord is surrounded by mountains and glaciers. It was pretty cold, but manageable. I think it was about 50 degrees or so, but the wind was pretty strong so it was better to view the scenery from inside. While we were cruising, there was a piece of the glacier that fell off into the water. It sounded like a huge crash of thunder that just went on and on. There was a huge splash and the glacier sounded like it just kept cracking. Super cool. Here are a few pics from that bay... 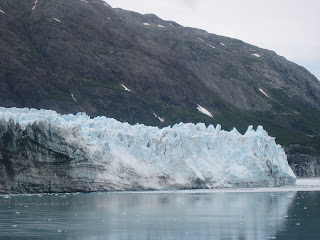 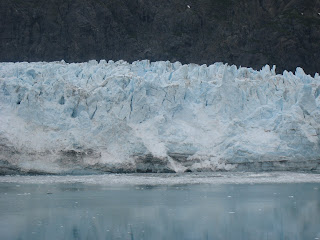 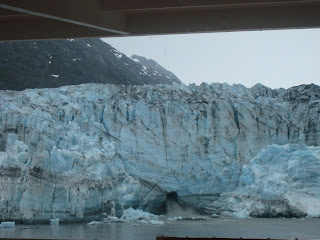 Look closely...do you see the water pouring out of the middle? Just to give you an idea of how big these glaciers are, that water hole was at least the size of a suburban or other large SUV. 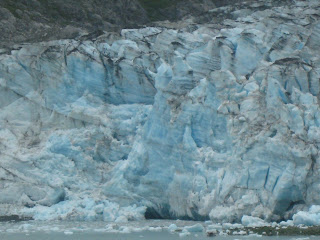 The color of blue that is seen here is muted by the picture quite a bit. In person, it was so vibrant.

Tuesday we stopped in port at Skagway, Alaska. We were very fortunate that the weather cooperated with us. Each town that we went to, the locals were telling us that it was the first day of nice weather in weeks. It seemed to follow us wherever we went. I love to hear stories from the locals to see how life really is for them. Most of the tour guides were from the lower 48 and had come to each area for the summer and will go back to school when the tourist season is over at the end of September. In Skagway, the price for a gallon of milk runs about $6.00+, gas is about the same. Also, they only get deliveries of fresh fruit and vegetables on Tuesdays, so if at anytime during the week you have a hankering for an apple, you better hope it's Tuesday because everything goes so fast.

We decided that on this cruise we would do whatever excursions we wanted since we saved so much on airfare. In Skagway, we went on a dog sled and went to the Musher's camp. For those that don't know, a Musher is someone that is a dog sled driver. There are a couple of main races that they participate in. At the musher's camp, we had an oppurtunity to listen to a musher talk about the races and what all it is. For the iditarod, the temperatures can go to 50 below! That is crazy! I don't know how anyone does it. 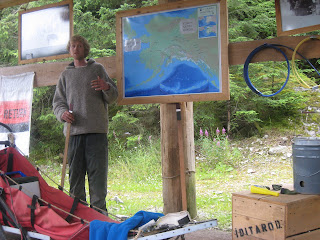 I'm not gonna lie...I was a little disappointed in the dog sled experience. We were on a six person 'sled' which was really just a golf cart type thing with no top. We were attached to 16 Alaskan Huskies, which is just a fancy way of saying 'mutt'. I think we kind of expected 'disney dogs'. The dogs were really lean, small, and mangy. While we were on the sled, we got to a hill, but they didn't want to wear the dogs out, so they hooked us up to a car that drug us up the hill. We then went in a circle on the dogs and then ended. It wasn't really worth the price, but at least we had the experience. 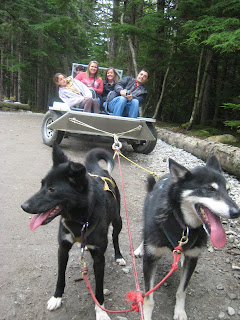 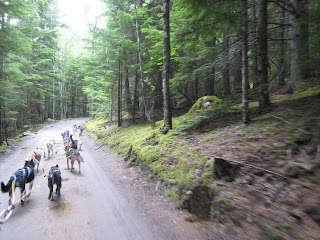 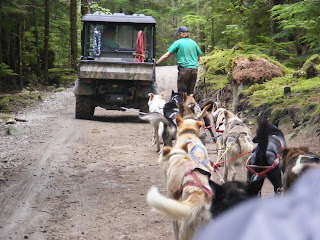 Being dragged up the hill so the dogs don't tire.

On our way back to the ship, we noticed what it's like to live in a small town and not have a lot of little things matter, like street names for instance...Love it!! 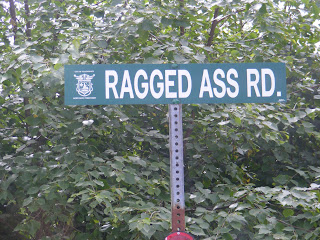 We also passed one area and saw two missionaries sitting out by the church. The church was so small. It looked like a log cabin and like it couldn't hold more than 25 people. 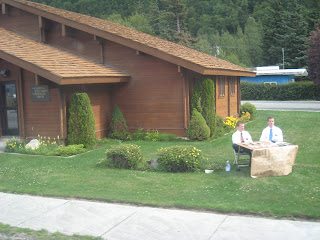 I wonder what areas this mission covers. I bet they have to take a sea plane to get anywhere. It would be a hard mission, especially when the winter comes. One lady was telling us that they have to plan a trip to fly to the closest Costco so they can stock up for the winter. She said that she had to keep it a secret from her neighbors because she'd get too many orders from people. I guess I kinda take advantage of the fact that I live about 5 minutes from Costco!

OK, so I'm posting this, but it's not finished. I'm sure you are thinking, "Oh my gosh, how could she post more?!?!" Well, I'm only half way through the trip!!! There are some funny things that happened the second half though, so there is more to come. I am too tired to finish the post right now. Hopefully in the next day or two I can finish...

I have been looking forward to hearing about your cruise. I have always wanted to do a cruise, but I don't know if I want to do an Alaskan one. I think Shawn does.

Wow I'm jealous, it sounds like a fun trip. I can't wait to hear the rest.

You little bum!!! Just kidding - I'm just jealous! I'm so glad you got to go, I've heard those cruises are AWESOME! Welcome home!

Wow, those glaciers are amazing! Looking forward to hearing the rest... Leah

More, more, more! You know how I like to live vicariously through you! No really, sounds awesome! Can't wait for the 2nd installment...pins & needles! ;)

oh my gosh! that sounds awesome! i'm totally jealous - we want to go up to Alaska so badly! looks like you had an awaesome time! ...cant wait to hear about the rest...

I have two comments regarding this post. One, I am offended by the word "ass" on your blog, and would really prefer you keep your use of language in mind when thinking of your readers. And two, those are the ugliest dogs I have ever seen. Really, Hollywood is fooling everyone with the fluffy dogs. Like, in the movie that I purchased from the REDBOX at McDonalds..."Eight Below"--those are the dogs I expected to see. Fun trip though...wish I could have gone.