My roommate, Michelle, went home for the summer to help out on their ranch. Janelle, Megan, & I decided to take a road trip to visit. She lives in Cody, WY, which is about a 7 1/2 hour drive. We had a really good time on the drive up there. We had plenty to talk about and the time flew by.
Well, since Cody is the 'Rodeo Capital of the World', we of course we needed to check out the rodeo! So, there is a rodeo EVERY night in the summer. It was really fun and there were some pretty cute boys to watch, so we had no complaints about that. :) I'm not a country girl, so I don't really know the names of the events, but I'll wing it. We watched the horse bucking, barrel racing (kids and adults), the one where the calf gets tied up, and the one where two people have to rope the calf (one gets the head and one gets the back feet). It was pretty entertaining. Oh, we also saw the bull riding. I think there were only a couple of people that lasted longer than 2 seconds, let alone the entire 8! Oh well, it was cool nonetheless. I think the cowboys still had fun and were excited. Here are some pics from the rodeo... 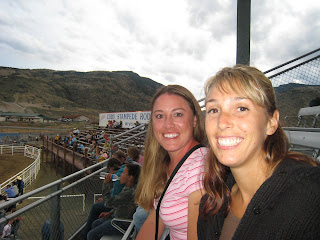 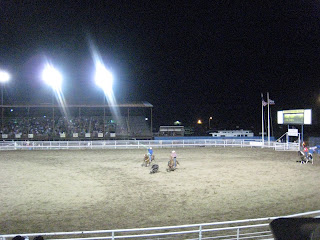 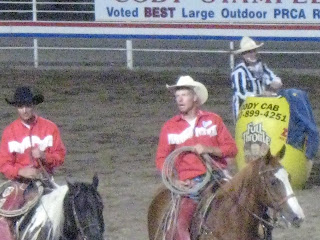 K, so the quality here isn't great, but these are the Dodge Pick-up guys. A couple of hotties! They ride alongside the bull riders and help them get off and not get trampled. 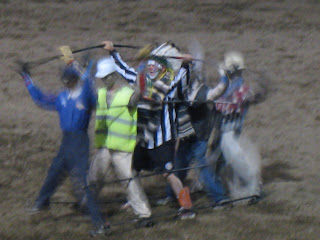 This is the Village People singing YMCA 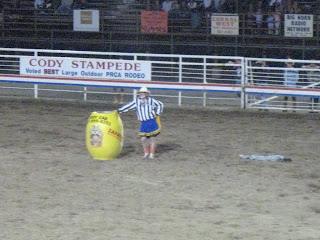 The rodeo clown in his cheerleading outfit. Hot.
On Sunday, we went to church and just took it easy the rest of the day. It was so nice to just relax and enjoy being out of town. Monday, we went horseback riding. 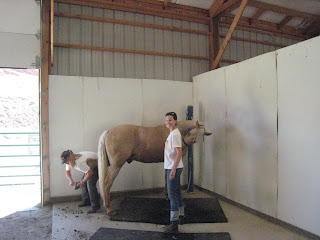 Michelle and Megan getting Rascal ready to ride 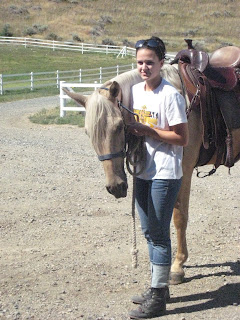 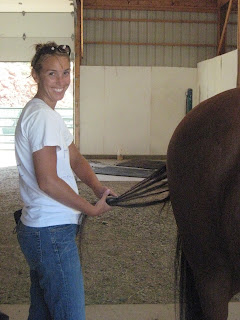 Janelle getting Smoke ready to ride 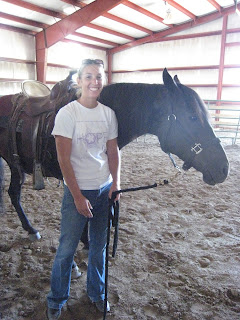 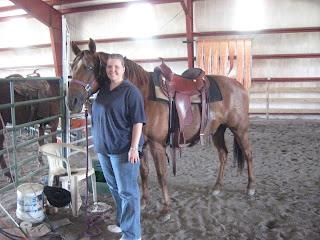 I got to ride Mark. He was a grand champion of something, I don't really remember of what, but he's pretty impressive!

Michelle and her dad were riding Princess and Dude, respectively. I didn't get a picture of them, though. Oops. We rode for a few hours around the ranch and then along some trails behind their house. It was beautiful!

Tuesday, we went four-wheeling all around. I haven't gone four-wheeling since 2007 and that was in Ensenada in wine country, so it was a little different! We went around all sorts of trails and hills and a little rougher terrain than wine country! It was so much fun and I decided that I definately need to get me one of those in the future. Later that day, we headed home. The drive back was pretty fun, too. You'd think that after a seven hour drive there and three full days with the same people, you wouldn't have anything else to talk about. Well, we still chatted pretty much all the way home. We had an awesome time and it was so fun to get to know these girls a little better. I can't wait for our next trip!

looks like you had a super fun time. It is fun to see what you are up to. You are just a traveler. Wish I could just up and go sometimes :)

that sounds SO FUN!!! i went to Cody while I was living in WY, but I definitely didn't have that much fun...

AND may I just add that i absolutely love your 'technical terms' "...the one where they..."