Today we had day one of our Cox Family Reunion. We went to Copperton Park out by the copper mine. It was an awesome park! We played a little kickball, which was super fun! I don't think I've played kickball since elementary school. The kids were a little wary when I came over and asked to play, I think they didn't think I could hack it. Boy, were they in for a surprise! I hadn't lost all my stellar moves. I was so into it, I chucked the ball at some little kid and hit him in the head, oops! He was OK, so don't worry. Besides, he was just some kid that came into the game and he was a little too cocky for his own good. So, that sounds rude and like I meant to hit him, but I didn't, I swear! 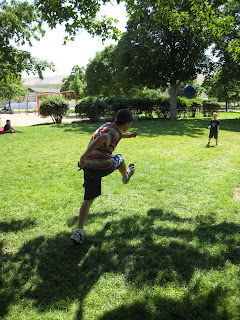 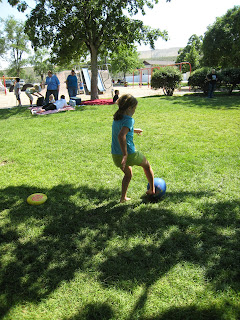 Anyway, after a friendly game of kickball, we played a little tennis, then scattergories, then pretended to play lacross (or at least threw the ball around). We only played that for a few minutes because I accidentally threw the ball into a tree and lost it, oops! 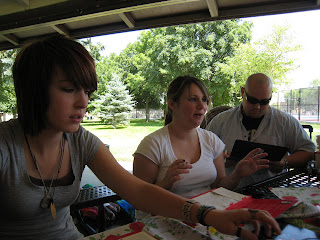 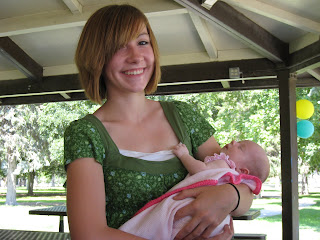 We all fussed over the newest member of our family, Miley. Her mom, Lisa, is in the white in the previous picture. 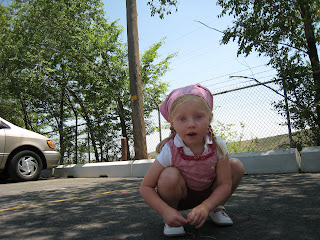 This was just so cute, I couldn't help but post it! :)

By the end, we were all pooped and ready to rest up for our next fun-filled day!

I loved this park! It was fun with all of the "play options". I waited all day for the kids to leave so that I could go down that slide, you know the double one. Anyway, so Mom and I both went down as everyone was leaving. It went a little faster than we thought and Mom accidentally bit the dust as she landed...oops! ...it was the second time that day (tug of war), but she's a good sport about it!